THE TOP 10 LEADERSHIP FLAWS OF A BAD LEADERS

Today we want to share with you all a recently-released study that revealed the top 10 fatal flaws that make a leader a bad leader! Although a leader may think strategically and drives results, it’s a common occurrence for the very same leader to display leadership flaws and reach a success plateau where cooperation thins, and frustrations escalate. Leaders become stale and their boss sees results decline and information silos start to form. Most importantly, engagement levels start to drop, and absenteeism begins to soar.

The study analyzed the behaviour of 30,000 managers and close to 300,000 360-degree evaluations of their peers, reports, and bosses. By analyzing the top 1%, bottom 10%, and recently-terminated executives, they looked for warning signs that predicted failure. What they found was that poor leaders stem from:

WHAT MAKES A “BAD LEADER”?

What makes a “bad leader” is they could be doing more in the eyes of those below and above them. These “bad leaders” require leadership development programs so they can accurately be in tune with what’s going on internally, and so they can better articulate a clear vision and purpose to teams. By having your leader take part in a leadership development program, they develop a clear understanding of what it takes for them to personally inspire the leadership of others.

THE TOP 10 FATAL FLAWS OF A BAD LEADER:

The number one reason a leader failed was due to their peers labeling them as unenthusiastic and passive.

Leading by grazing around the office like a cow doesn’t benefit anyone. Instead, be active and engaging when travelling throughout the office. It’s important to be enthusiastic and energetic in the workplace, as well as visible and accessible to employees so they don’t feel stress, anxiety, or pressure to ask questions, suggest ideas, or raise concerns. Instead, take the time to have small conversations, digest ideas, and share results with employees so they’re aware of what’s going on internally as well.

2. FAILURE TO IMPROVE AND LEARN FROM YOUR MISTAKES

Everyone makes mistakes, so allow them. Implementing a no mistakes or “no tolerance policy” adds pressure, stress, and anxiety, and is a clear trait of a bad leader in the workplace. Your employees aren’t comfortable walking on egg shells, and as a result they don’t work to the best of their ability.

Many leaders recruit those that fit the job description on paper and hope they’ll be competent enough to be successful. In many organizations, being competent is enough to survive but not enough to grow. Instead, leaders must develop top-talent and recruit those that will not just do the job on paper but also go the extra mile. It’s far more effective to hire an employee who is already engaged and able to adapt to your culture rather than developing an employee that is initially disengaged.

The study showed the worst leaders did not attempt to make goals long term and as a result employees coast-feeling that mediocre performance is acceptable.

Poor leaders are unsure of what the future holds, and unsure of what decisions need to be made, and what direction needs to be given. Because of that, transparency levels are low and employees feel they’re not working toward a common goal… or any goal for that matter. Solve two leadership flaws with one leadership development session by bringing your team together to create an inspiring vision and action plan to achieve the vision.

5. NO DESIRE TO COLLABORATE OR BE A TEAM PLAYER

A successful leader has open and frequent communication with his or her team, they don’t avoid interaction with peers or subordinates and they work to develop personable relationships. Bad leaders view work as a competition and colleagues as opponents.

Leaders can’t walk around attempting to lead with their head in the clouds as if they’re aware of everything. Learning doesn’t end when one reaches a higher position that holds them responsible of other people. Unless a leader is willing to grow and expand their skills, then the people you lead will reach a plateau of success. At the same time, it’s just as important to not take on responsibilities that require skills you don’t have. Instead, recognize who would be the best fit and trust them to do a successful job without you micro-managing every step.

6. NOT ACCOUNTABLE FOR THEIR OWN ACTIONS

Leaders not being accountable for their actions is the greatest way of losing trust among peers. Bad leaders make bad leadership practices acceptable.

Bad leaders are unimaginative and closed-minded and as a result training programs become stale and disengaging. Instead engage everyone together to align on what is priority for this quarter and let the team build the action plan.

A leader can’t only be specific about what they want and when. Don’t attempt to communicate what you want exactly and then reshape communications over and over. Instead, discuss with people ideas, opinions, and what their thoughts are. Demonstrate to employees you value their ideas and opinions and if you use one of them, give credit!

8. FAILURE TO DEVELOP THEIR TEAM

By not participating in or providing leadership training programs, then leaders are seen as self-centered and uncaring for their peers/colleagues. The greatest thing a leader can do for a peer or subordinate is to demonstrate care and a want to develop their skills.

A key trait of a bad leader is talking down, being rude, abusive, and insensitive of those around them. Because of this, fear and pressure among subordinates increases while respect and admiration for the leader decreases.

Part of initiating and demonstrating change is also improving the working environment and culture through effective communication. If employees work in a negative environment where transparency is low and barriers to information are high, they’re going to feel untrusted, frustrated, and more than likely be disengaged. Instead remove those barriers and enable employees to live a positive lifestyle by providing wellness options to manage their stress, anxiety, and fears.

The worst of all leaders are those who have no care whatsoever and just jump into the fire without considering the consequences. They fail to see the long-term implications of not developing leadership in their team.

HOW TO AVOID BEING A BAD LEADER

So, now you must be thinking “well how can I avoid being a bad leader?”. What can be done to ensure leaders stay focused and inspired yet in a unique way that also inspires and engages others?

LEARN KEY LEADERSHIP TRAITS WITH THE LEAD THE ENDURANCE PROGRAM

This highly-simulated leadership development experience called, Lead the Endurance immerses participants in an Antarctic Adventure circa 1914. With a small amount of tools and resources, your leader and their crew journey though the arctic ice while gaining insight on how to lead, inspire, and engage others.

This leadership training program enhances self awareness and leadership qualities. While also focusing on the participant’s ability to clearly recognize and articulate leadership insights in relation to their personal and organizational “leadership.”

Through this leadership development program, organizations and teams understand and practice what leadership qualities it takes to overcome the Arctic challenge along with discovering new and unique ways to better communicate and implement strategies.

Through the Lead the Endurance leadership training program, participants learn to:

– Create a vision and articulate the purpose to their teams

– Connect every team member to the Big Picture

– Determine the right process for team effectiveness and team morale

As a result of the Lead the Endurance program, participants return to the work environment with an enhanced understanding of what it takes to get the most from their peers and subordinates.

BECOME A GREAT LEADER WITH LEARN2

“Learn2 did a fantastic job of connecting the Shackleton experience to the work environment. It was a great example of what kind of leadership qualities are required to lead a team. Truly amazing!” – Zahra Hirji, Leadership Development, Manager, Deloitte

Transform your Leaders. Plan Your Next Leadership Development Program.

Each person has a natural communication style. Understanding yours can and will impact how effective you are when dealing with friends, co-workers and clients. 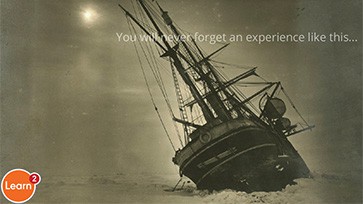 This leadership development course will help you uncover leadership potential in your team. 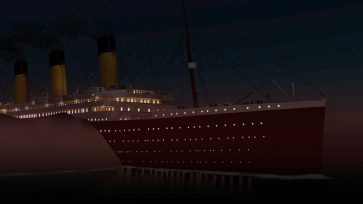 Save the Titanic Leadership Challenge

A leadership development course that immerses your leaders in a reimagining of the renowned tragedy, reigniting their love of learning & compelling them to pull together to secure the future of your company. 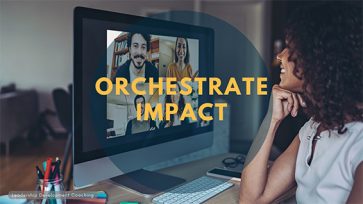 Explore strategic leadership with a leadership development program that aims to empower participants to achieve goals and lead differently.